These 2 Invisible Forces Are Silently Controlling Your Abundance
Take The Exclusive Law Of Attraction Test Today…
And Find Out What ‘One Thing’ Is Holding You Back From Applying It Successfully In Your Life
617,569 Tests Have Already Been Taken NO CREDIT CARD REQUIRED
Takes Just 30 Seconds...
Click The Button To Begin
Take The Test Now!

These 2 Invisible Forces Are Silently Controlling Your Abundance

When it comes to manifesting greater wealth and success, you’ll normally find the same advice scattered across the internet, like…

“How to get rich with the Law of Attraction” and “How to get wealth advice from your higher self.”

… that many of the world’s most successful and influential people – from Oprah Winfrey to Deepak Chopra to Russell Brand – are quietly using every day to gain the upper hand.

And combine them with the invisible forces surrounding you…

To tap into a glitch in the Matrix that allows you to bend reality itself to your needs.

(Which in the context of this article, is unlimited prosperity!)

What you’re about to discover is a little-known ‘Prosperity Formula’ – universally proven by both scientists and spiritualists alike – that will empower you to harness these forces almost on autopilot.

And when you do this…

1) The first part of the Prosperity Formula is the invisible world of SOUNDS.

In the world of personal growth, many people use affirmations:

Those positive statements you recite every day to raise your energy and manifesting power.

If you’re like many people, you may have tried affirmations yourself… after all, it is a $1 billion per year industry!

But maybe you’ve yet to experience the PROFOUND life-changing effects you’ve been promised.

And there’s a good reason for that. Because as you’re about to see, there’s a crucial missing ingredient in affirmations, which is…

… it’s not just about what you make yourself BELIEVE by reciting statements like:

“Money comes to me easily,” or “Success is my default state”…

… nor is it simply about faking it till you make it with statements like:

… it’s also about the vibrational power within those actual SOUNDS.

Positive words carry both positive vibrational charges… and the building blocks of the Universe itself!

Ancient languages like Hebrew, Sanskrit and Tibetan knew this well – creating complex sound systems that engage not only a person’s left brain hemisphere, but also their right: the side associated with intuition and introspection.

In fact some words even stretch across seemingly unrelated cultures – like the words ‘Ya’ and ‘Wa’, which form both the name of the Jewish God Yahweh…

And in the Yogic tradition in the Mantra, ‘Na Ma Shi Va Ya’.

When you use words correctly, they can resonate in different parts of your mind and central nervous system… with breathtaking consequences!

And once YOU understand how to harness these charges in words, you’ll be able to use the power of sounds to go beyond plain old affirmations…

… into the realm of using sound to tap into the fabric of the universe – and become more successful and abundant than you ever thought possible.

And this is nothing new either – Pythagoras used sounds to heal. Dr. Masaru Emoto’s famous water crystal experiments used spoken words to influence water molecules. And scientists at the Argonne National Laboratory are even using sound waves to enhance the effectiveness of medicine!

And replace them with prosperity-boosting words that serve you!

2) The second part of the Prosperity Formula is the mysterious world of SYMBOLS.

Did you know that just LOOKING at the geometric lines of certain symbols – many of them ancient symbols used for thousands of years – can alter your brainwaves?

And even open gateways to higher states of consciousness?

This symbol is known as the Sri Yantra: 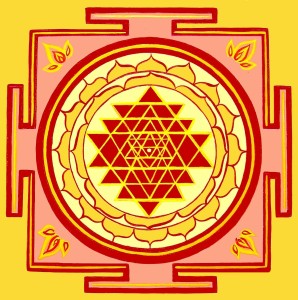 Or in Sanskrit, it roughly translates to… “The Symbol of all Creation”.

The Sri Yantra is said to be over 12,000 years old. And in this time, spiritual explorers like monks and Vedic scientists have used it to meditate and achieve superhuman states of consciousness.

In 1984, researchers at Moscow University used an EEG machine to observe the brainwaves of test subjects who were asked to stare into the Sri Yantra.

What they found was that within moments, these people’s brain waves slowed down to the Alpha Level: a state of mind associated with intuition, creativity, relaxation and deep meditation.

Not only that – it also began creating new neural pathways in their brains… which means it was actually PROGRAMMING and physically UPGRADING their minds!

Can you imagine the power of a symbol that can switch on your deepest inner potential, just by LOOKING at it?

Remember – the Sri Yantra is just one of many symbols that can have a profound affect on the human mind, body and spirit.

For thousands of years, billions of people, from our ancient ancestors to modern civilizations have harnessed the power of symbols to empower, inspire and influence millions.

Ancient Egyptians used hieroglyphic symbols as a means of communication.

The Aborigines of Australia used symbols in their art to record and retain important information.

Almost every religion and institution on the planet has its own symbol.

Today, brands like Coca-Cola and Nike use their corporate symbols to create desire.

And there are even symbols with hidden meanings and messages…

It’s clear that symbols can be used to control and sometimes even manipulate you.

But what if you could turn the tables, and use this power for your own good?

Can you imagine what would happen if you could consciously squeeze out the power of symbols with the power to ENHANCE your life?

Imagine if you had a go-to symbol for when you need to make a big decision at work. Or when you’re in need of money.

An article by Natasha Dern on the Huffington Post even points out how symbols can be used to enhance meditation:

“The aim of using symbols in meditation is to move beyond linguistic interpretations and uncover a level of intuitive understanding beyond language, which profoundly transforms the way we experience the world and ourselves.”

“Sounds good, but how do I apply this wisdom in my life?”

… is the right question to ask at this point.

This free PDF has been enjoyed by thousands worldwide. In it you’ll discover:

* 6 ancient power words containing a vibrational ‘blueprint’ that can rearrange your DNA and turn you into a prosperity magnet.

* How to COMBINE sounds & symbols to produce a harmonic effect in your body and brain for even greater success magnetism.

* A stunning study by Russian molecular biologists that reveals how this seemingly innocent thing you do every day could be severely affecting your ability to attract wealth.

* A selection of power symbols hidden in plain sight all around you, that can have a surprising effect on your thoughts, actions and even ‘luck’.

While your intention is still fresh in your mind…
Click here to download your free copy of the Prosperity Formula PDF – and discover how to use the unlikely power of sounds & symbols to supercharge your abundance.

Free Access To The
Law Of Attraction Tool Kit
Over 108,569 people have downloaded this life-changing tool kit already
Get Your Free Kit Now! >>
NO CREDIT CARD REQUIRED
Finding it difficult trying to master the Law of Attraction? Take The Test Now!